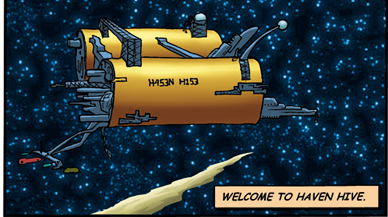 Orbital habitat. in Celeschul system built out of freight containers and scuttled ships, one of which is an old luxury liner, the //Serial Beggar//. It contains some parks (where you do not want to sleep at night), residential districts, business districts, and docks.

The Beggar's Boardwalk is a public thoroughfare which provides access to the Serial Beggar through at least five hatchways from within Haven Hive. The Serial Beggar also has longboat bays which bypass customs, and is where Professor Pau has his offices and laboratories on Happifun Rec-deck

H453n H153 is an habitat built out of abandoned freight containers and scuttled ships.

Some time before they met up with the Toughs, Kathryn Flinders' Parkata Urbatsu group did some running at Haven Hive. It was a dump. Half of the interior is noted as being a slum made out of spitboard and duct-tape remnants 2010-12-30.

[Insert uncertain and speculative facts about the place.] Haven Hive appears to have something similar to capsule hotels called "caixao", which is Portuguese for "coffin" 2011-02-23.