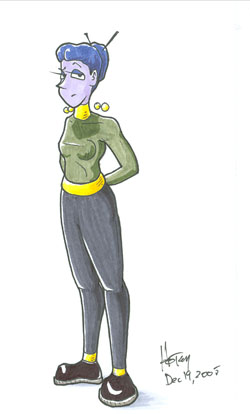 [Taken from the Basic Training Page; will need updated] Colonel Ceeta is marginally less human than the captain, at least by the standards of 21st-century readers who only see purple skin in japanese comics and at really cool parties. As of Book 3, she serves as the __political officer__ aboard the Serial Peacemaker, where she can ensure that the interests of the mercenaries' current employer are being seen to. Prior to her recent posting as a mercenary cat-herder she spent the better part of a decade (or the worst part, depending on your point of view) as a bounty hunter, and her very last job in that line of dirty work involved tracking down one of Tagon's mercenaries and bringing him to some sort of justice. Her payment for that job (somebody else collected the target) was a new job, working with the same people she'd been hunting. Prior to bounty-hunting (in an officially unofficial capacity, make no mistake) she was a UNS Colonel, from which post she was dishonorably discharged for CENSORED BY AUTHORITY OF UNS INTELLIGENCE. Naturally the families of the CENSORED BY AUTHORITY OF UNS INTELLIGENCE were less than pleased, but CENSORED BY AUTHORITY OF UNS INTELLIGENCE. And that's UNS politics for you. The United Nations of Sol counts one-point-one trillion sapient beings of a dozen species as citizens, and it makes no effort whatsoever to please all of them. At the end of the day, it should be obvious that Col. Ceeta's loyalties lie with herself. Keeping that purple skin firmly attached and non-perforated is at the top of her priorities, regardless of the best interests of whomever she happens to be working for at the moment

Thud Bongo, when she was a mercenary General Xinchub, when she was recalled to the UNS Tagon's Toughs Yoming Galactic core in custody of the Fleetmind/Petey