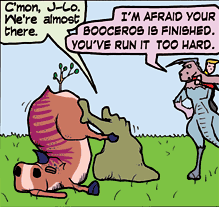 Not much is known about this creature; The name Sergeant Schlock chose for his second booceros mount originates with a curious consipiracy of colloquialism, celebrity, and tabloid journalism in the early 21st century. While historians fail to concur on the exact social pressures involved, by 2010 the name "J-Lo" had supplanted "Bessie" as the most popular name for milk cows 2003-12-17. .