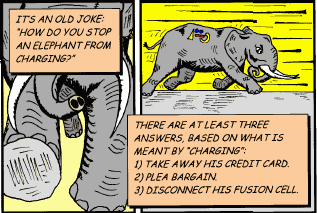 Sapient African Elephants. Also referred to as Loxies (which is a slur, and is grounds for goring, trampling, and trunk-thrashing 2000-12-12).

Both Loxies (Loxodontus Africanus Sapiens) and Ellies (Elephas Maximus Sapiens) customarily adorn themselves with tatoos. Strictly speaking, they don't do it themselves, since the gene-twaddlers responsible for granting them sapience neglected to provide them with proper fingers, but who's keeping track? Regardless of which poorly-compensated body-artist is holding the needle, the practice is very widespread. Some say that sapient pachyderms adopted the custom as an alternative to wearing clothing, in order to better distinguish themselves from their dumb-as-stumps cousins. Others suggest that it's a concession to humans, most of whom can't tell the difference between a dog and four-point buck (as indicated by what gets shot at during the deer hunt), much less tell individual pachyderms apart. 2002-05-26

[Governments, clubs, or other organizations specific to this race]

[Insert uncertain and speculative facts about the character.] What relation genetically to Neophants?