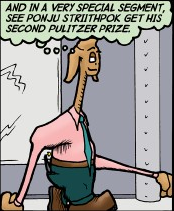 Known for his investigation into the Tinth-Philkra Dialogues & on-air interview with Colonel Henrik Kazunori concerning them 2003-05-04.

It is unknown at this time what race of sophonts Ponju belongs to.