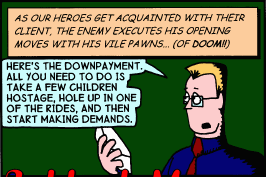 Tom McSony figured that he had lucked out. The authorities never connected the 'terrorist' attack with him or with his employer. Still failing to deliver a crushing media blow to Magic Dream-Land he was reassigned to World of Sidney's offices on Europa. He worked there for a month, taking over their giant mutant ice-kreely breeding program, which was cut short after one of them ate him 2001-09-30.