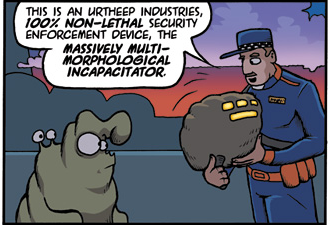 A munitions company, presumed competition to the (in)famous Strohl Munitions.

No history of the organization has been revealed in the strip.

The 100% non-lethal, security enforcement device, the Massively Multi-Morphological Incapacitator, or M3 Tater for short (because in standby mode, it looks like a potato) 2014-06-18.

[Insert known relationships with other groups or characters]

First mentioned in the strip 2014-06-18 when a security officers boasts of his 'tater' to Schlock.