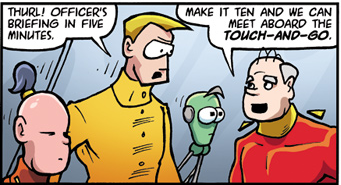 In the Mercenary business, "old timer" can mean up to, oh, two or three years experience. Thurl is the exception to that rule. Though he doesn't have position authority, he often has personal authority 2009-04-15.

Thurl is a balding, gray haired, crafty, authoritative man, with a disposition to acquire data and act as support, not a soldier.

Thurl underwent a visible change on 2001-11-07, explained as a "moderate genetic predisposition towards obesity", which was rectified when the magic cryokit rebuilt him, part of the Schlocktoberfest 2001 story arc

First seen at the rank of Master Sergeant, he was promoted to Chief Warrant Officer on 2002-04-14. He has been quoted as saying he would quit the Toughs if he is pushed a millimetre above that rank 2009-03-28

He has been known to be able to get screaming, angry, armored ladies to back down and cool off, as is illustrated when he breaks up a fight between Elf and Para [FIXME]. He says this is due to, again, his personal authority.

Thurl's first appearance is 2000-07-11; he is trying to clean up a virus he believes they caught from the hypernet, not knowing it is the New Sync Boys artificial intelligence "NSB" that becomes Ennesby.