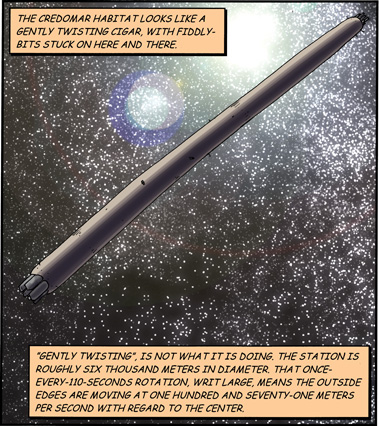 A cylindrical space habitat roughly six thousand meters in diameter. It has an estimated internal capacity of some 60 kilometers long and a nearly 6 kilometer diameter.

It is initially listed as a "Project" of the UNS Security Council. Tagon's Toughs take a shipment of food to the habitat 2008-05-01. From there, it's pretty much a Charlie Foxtrot.

Later, King Lota hires the mercenaries to design an evacuation system that will empty Credomar instantly in an emergency 2009-03-22. As soon as they have it finished, Lota evacuates the residents leaving behind the original structure which turns out to be an incredibly huge hyperspace death ray 2009-12-11 to 2009-12-16.

[Insert uncertain and speculative facts about the place.] The length /diameter ratio in the illustration is about 15 to 1, which would mean a length of nearer 90 km