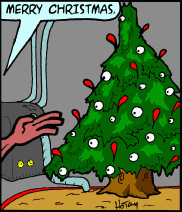 The male eye-worm impregnates the female eye-worm who has made her mating-nest in the pollen fronds of an eye-tree. The pregnant female now wriggles into an eyefruit bud, pollinating it. She then swells up inside the fruit, consuming it as it grows. She becomes the eyeball inside the eyefruit rind, and she passes visual signals along the protein-chain into the tree's distributed 'brain.' she lays thousands of eggs on the inner layer of the eyefruit rind, which are nourished by a nutrient layer in the rind. The rind falls away naturally in the autumn, leaving the tree able to see which direction would be best to eject its spumen of tree-spores.

The baby eyeworms hatch, devour the last of the rind (and each other, depending on how scarce food is in the autumn) and then burrow into the ground, where they are infected with a ground-dwelling bacterium-analogue. When the worms emerge in the spring, they carry this bacterium with them. The females inadvertently pass the infection to the pollen-fronds. This infection proceeds through the hot summer months, until the pollen-fronds are pressurized, pus-filled pockets of eye-tree spores, which the eye-tree can aim at choice spots of ground.

Eye trees were first mentioned by Sergeant Schlock when he and the Toughs arrived at Ganj-Rho to retrieve a new set of eyes for him.2001-11-25 The first time we see an eye tree is when Jun-Chev unveils the last remaining trees to Boss Chev.2001-12-25

[Insert uncertain and speculative facts about the life form.]