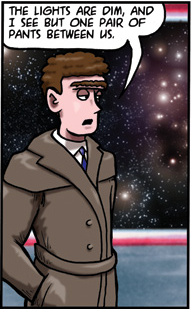 Ostensibly the Marineris Police Lieutenant that hired the toughs to infiltrate the Barsoom Circus, he was later revealed to be UNS Intelligence.

Timmons first appearance is in strip 2009-05-10 when he meets Sgt Schlock on Kelrik Station.

Schlock describes Timmons as "a very, very bad man" in response to being scolded by General Bala-amin 2014-04-03.