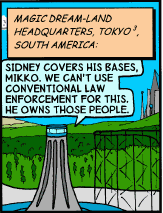 The South American city of Tokyo3 was the victim of a combination of aggressive Japanese colonization of the third world, and a brief but significant series of twenty-seventh-century western-hemisphere revolutions in which a group of mathematicians and physicists suddenly found themselves wielding considerable power. Fully fourteen major cities were renamed in an effort to 'organize' things before the numerological and nomenclatural tyrants were deposed by a coalition of actors and comic strip artists. The revolution that followed that one resulted in the total destruction of Port Dilbert and Gellar-Prinzeton. [footnote, 2001-09-12].

No pages meet these criteria.

[Insert uncertain and speculative facts about the place.]