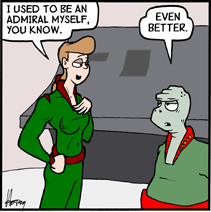 Admiral of the Tohdfraug fleet.

Tebbir, one of the amphibian Tohdfraug people, was a warmongering conqueror attacking planet Qlaviql in the Qlavo system when Petey abducted the entire Tohdfraug fleet 2005-08-28. Petey teraported them to the Andromeda galaxy and set them to work fighting the Pa'anuri 2005-09-03.

Later, Tebbir and his fleet were seen defending planet "Wet" in Andromeda 2006-04-02. Petey took Ambassador Breya Andreyasn to meet them 2006-08-09, since he had earlier promised to show her some of the people whom he had made disappear 2006-07-18. Breya offered to arrange for the release of Tebbir's fleet, but he refused (on the grounds of his newly-developed conscience) 2006-08-10.