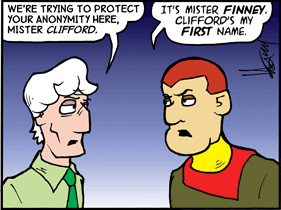 Clifford Finney was a sniper on the Credomar Habitat.

Clifford was aligned with Southport and thus antagonistic both to the Infracrats and to Tagon's Toughs 2009-01-05. When Schlock and Ebbirnoth were walking through Credomar, he tried to kill them, shooting out Ebby's eye 2008-08-10. Schlock returned fire unsuccessfully 2008-08-18. Later on, he identified himself on the news while being interviewed by Frank Hannibal 2008-09-10.

When the mob had set fire to the Stationwaist and Schlock's squad was trying to prevent the detonation of the antimatter, Clifford attacked again, shooting out Schlock's comm 2009-01-04. This time Schlock was ready and killed him with a grenade launcher 2009-01-06.