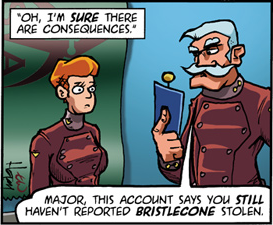 Colonel in Sanctum Adroit. Fired Major Alexia Murtaugh for her involvement in the incidents in Haven Hive's Beggar Bay 2011-11-01.

I originally planned for his name to be Hans Detolf, but after seeing some really impressive Spanish mustaches, I opted for Menendez instead.