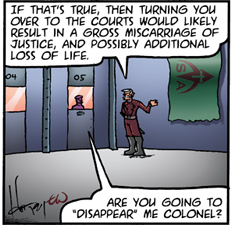 Mercenary Company in Celeschul region, though they refer to themselves in the strip as "Emergency armed response organization" 2011-07-29.

Described by Tagon as "the haughtiest, most self-righteous mercenary company I know of" 2011-11-04.

Contracted for security by Professor Pau on Haven Hive. Only authorized armed response body on Haven Hive 2011-07-29 Supplied several Pendrake CS-3100 Ablator Exo-Suits on contract for use by Maximillian Haluska's hirelings who worked as security for Professor Pau on the //Serial Beggar//. Accepted a contract to provide law enforcement services in the city of Jumpstar Prime in Eina-Afa 2015-08-20

[Insert uncertain and speculative facts about the character.] The name Sanctum Adroit is made up from words meaning: Sanctum: A sacred or private place 1 From Latin sānctum (“holy place”) which is also the root for sanctuary

Adroit: Dextrous (lit: right handed), deft, skilled 2 So far it is trying hard to live up to