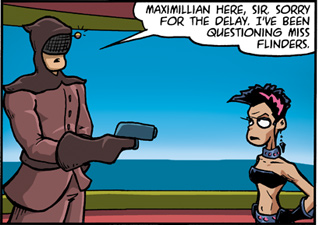 Maximillian Haluska, often simply referred to as "Max" by various characters, was a hooded and masked enforcer for hire who showed up on Haven Hive as an agent working for Professor Pau. He confronted Kathryn in her bus. After a failed interrogation attempt, he was about to shoot her but she disarmed him and shot him in the mouth, the only area not covered by armor, killing him 2011-06-21.

Though information hinted that Max might be a UNS agent 2011-06-12, it was later confirmed that Max was in the employ of the UNS and was sabotaging Pau's nanny program 2011-08-14.

After Kathryn donned his armor, she found that his mask had a heads-up display and a full comm rig with connections to the security systems on the Serial Beggar 2011-06-28. Kathryn was able to use this to suppress the fire containment systems and gain intel 2011-08-03.

Max later returned to life, thanks to RED Number Two 2011-08-19. He remotely detonated his mask, but Schlock ripped it off Kathryn's face before it exploded, saving her life 2011-08-21.

Returns to life because he has Project Laz'r'us Nannies in his system?