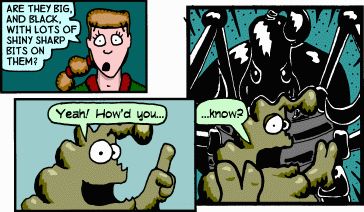 Diamond Beetles are large, black, shiny insectoid sophonts. The also have claws and an exoskeleton capable of tearing through the armor worn by the Toughs when first encountered, and an apparent taste for said humans. As most of the examples portrayed in the strip recently were born/hatched/ate their way out of human hosts, the individuals the reader encounters are portrayed in their own minds as children. Although small when first encountered, they rapidly grow in size to be larger than grunts in powered external armor. 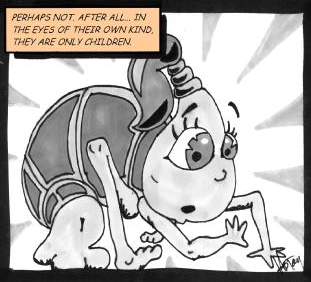 All the beetles named in the strip are done from the childlike perspective of their own awareness. This is reinforced by a change in the art style, presented as an if they were more human-like children vision. While this may cast doubt upon whether the subsequent very human names are indeed what the beetles refer to themselves as, they include the names Jenny, Tammy, Hannah, and Katie.

The Diamond Beetles have no formal organizations presented in the strips. However, the entire hatching infesting the Princess Tyola refer to themselves as sisters and regard each other as family.

Their shiny black appearance, residence aboard a spaceship, and method of hatching from a human host's torso may indicate that they were inspired by the xenomorphs from the film //Alien.//