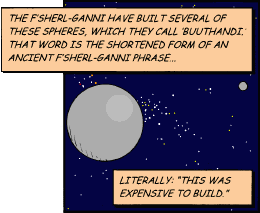 The language of the Gatekeepers, is quite possibly the oldest language still in use in the Milky Way Galaxy. It is old enough that it contains words the Gatekeepers themselves are unsure of the origins of 2005-07-10, and the Gatekeepers (or at least the race that would become the Gatekeepers) have been around for a million years or more 2005-06-05. From the examples that have appeared in the strip, many of the words in the Gatekeeper language are actually contractions of larger phrases 2001-07-022002-08-202005-07-10.

[Insert the known history regarding this language]

The language was first mentioned with regard to the origin of the term buuthandi 2001-07-02.

[This is for technology that does not appear regularly. For things like Annie Plants and the Hypernet, remove this section.]

[Insert uncertain and speculative facts about the language. Include links to Schlock in the Real World where appropriate.]