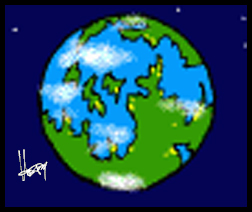 Single natural satellite of Earth. For much of Time Luna was a dead, lifeless ball of rock, savaged by the solar wind. Sometime in the early Second Millennium CE Humans terraformed it to be a living, blue-green worldlet.

Following humanity's furtive attempt at exploration in the late 1900's and early 2000's, humanity made a concerted effort at colonizing the Moon. The government of Luna was first organized in 2102 CE, and has remained in force since that time, making it the longest standing Human government. The name was officially changed in 2127 to Luna, following an extensive shame campaign. During the terraforming process the moon was given an atmosphere that is six times deeper than Earth's and was spun up to a 24-hour day 2000-12-03.

Because of the deep atmosphere and the lighter gravity, not only is Luna home to the longest standing human government, but also the tallest standing government, as many of the open-air skyscrapers of Luna are taller than 6,000 meters.

File:Http://static.schlockmercenary.com/comics/schlock20130127-a.jpg?1359524753 The worlds visible at the right edge of this panel are Earth and Luna. Earth is the little one with the ring -- it appears smaller because it's more distant, and it has a visible ring because there is a lot of material in close orbit around it. Luna, on the other hand, is a blue-green marble instead of an airless desert because humans worked very hard to make it a nicer place to live in spite of the environmental concerns.

"What environmental concerns?" you ask. "Nothing lived there!" True, but environmentalists were concerned that terraforming the moon would alter its night-time appearance to the eternal, species-extinguishing confusion of a number of insects, migratory birds, and ballad-writers. And in truth, the gloriously beautiful jewel the moon became still failed to compete with Earth's city lights, let alone the amber, equatorial glow of Earth's ring. Fortunately, new species arose and used that arch across the heavens for better night-vision, as a navigational tool, or as a cue to go misty-eyed just before the reprise Footnote, 2013-01-27.

Part of the United Nations of Sol .

History of Luna and introduction as a habitable worldlet, 2000-12-03

Location of the Bureaucracy Bountiful storyline 2000-12-03

Selenologists quite likely refer to changes in Luna from 2100 forward as the Anthropocene.

Return to the Welcome Page**