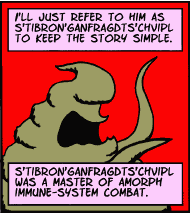 Eventually it was revealed that he was a failed hero, trying to save his people from Lady Emily's oppression of the amorphs, and Lady Emily's "daughter" Jane that tried to kill him was duped into it. When they fought, instead of the lump of inert amorph flesh expected, the result was Schlock.

[Insert a brief description of the circumstances of the character's first appearance in the comic and a link to that strip.]

The act of one amorph touching another passes memories between them, perhaps when Jane & Killer fought, they realized the truth of the situation, and gave their lives to create Sergeant Schlock, in the hope it would save their friends' lives.