The annihilation reactor or "annie plant" is the standard power source of 31st century galactic civilization. It converts a compacted mass of neutrons into energy, which is captured as electricity to power everything from hand weapons to multi-kilometer-long starships.

An annie plant consists of a spherical vessel, usually colored light blue, which houses all its functional components. The plant maintains a powerful gravitational field which keeps its neutronium fuel compressed. The exact method of matter-energy conversion and energy capture is obscure. 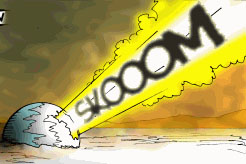 Most plants have automated systems which, if a fault is detected, will safely dump the neutronium pile before it has a chance to explode. If these systems fail (or fail to act quickly enough) and gravitational containment is lost, the evaporating neutronium will create a sizeable explosion. The sound of an evaporating neutronium pile is described as "skoom". The spherical vessel that contains the annie plant is incredibly durable, but is vulnerable to anti-tank weapons such as a "Nutcracker".

A less-catastrophic failure mode of an annie plant is simply to exhaust its fuel supply in too short a time, leaving insufficient resources to maintain the internal reaction. This renders the plant unable to provide power. Methods exist to safely "cold restart" a plant that has gone offline in this fashion; the process is referred to (at least in military and ship-contractor circles) as "warbucking" the plant [http:%5B%5B%20http:www.schlockmercenary.com/2003-02-13%7C2003-02-13%5D%5D 2003-02-13], jargon likely referring to the relationship between the fictional characters Daddy Warbucks and the titular "Little Orphan Annie" in Harold Gray's comic book series[1] .

An annie plant's power output increases with its diameter; a common micro-annie plant used in consumer goods might be a centimeter or less in diameter, while starships and planetary colonies commonly use annies in the tens-of-meters range. Extremely large warships such as Battleplates or O'benn Thunderhead Superfortresses often carry one or more annie plants larger than 100 meters.

Tausennigan weapon platforms such as the //Cloak of Untrammeled Dignity are known to mount nearly two dozen 25km annies[2] . In 2821, the Tausennigan Kssthrata constructed a 302 km diameter annie plant. It operated for 15 seconds before experiencing catastrophic failure. It did, however, demonstrate that the annie plant power curve holds true: "bigger is exponentially better". The ancient artifact known in the strip as Oisrí appears to be an annie plant over 3,000 km in diameter, and close to 1,000 times the diameter of current UNS manufacturing capabilities 2012-03-18.

There seems to be no upper limit on annie plant size outside of practical construction concerns. The lower size limit is unknown, but no larger than a small bead.