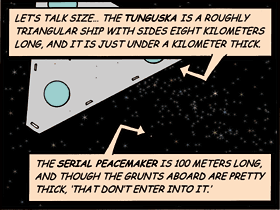 Battleplates were originally designed to protect planets from the sorts of events that create the geographical features for which the Battleplates are named. The student of geology should only need to hear names like "Chicxulub", "Vredefort", and "El'gygytgyn" to know that we're talking about large rocks landing where rocks ought not land.

While it might seem like overkill to have close to a hundred giant ships like these in one planetary system, that's because once you've moved all of the naturally occurring rocks-o'-doom from dangerous orbits, you begin to worry about someone else sending one at your homeworld from an oblique angle, and at velocities more typically associated with charged particles or recklessly-piloted warships.

Should a relativistic rock the size of a house hit your planet, it will ruin your entire day. Battleplates, with their swarms of long-range, hypernetted sensor drones, are insurance against that sort of event. And with their massively overpowered annie-plants, they're good for all kinds of things, including the odd spot of intimidation.

The UNS currently fields at least two classes of battleplate, the three-sided Tricorn class 2015-05-03 and a larger pentagonal design demonstrated by the Morokweng.

Battleplates are known to be equipped with breacher missiles the size of troop transports 2004-02-23.

[Insert the known history of this class of vehicles]

[Insert a brief description of the circumstances of the vehicle's first appearance in the comic and a link to that strip.]

[This section is for examples of this class that do not appear frequently. For example, an appearance by the Post-Dated Check Loan would not be listed here, but an encounter with the Staff of Unyielding Order (also a Thunderhead Superfortress) would.]

[Insert uncertain and speculative facts about vehicles of this class.]