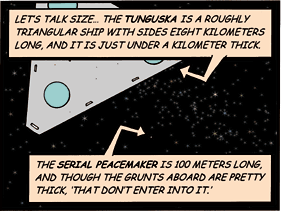 The Tunguska is/was a UNS Battleplate.The basic geometry of the Tunguska is the polyhedral simplex, a triangle. Tunguska is about eight kilometers to a side and just under a kilometer thick 2004-02-25.

General Xinchub's flagship, until his capture. Admiral Gracie, went down with the ship.

In strip 2004-03-11 the Tunguska is compared to an approaching dark matter entity and the difference in size is given using Disney's Finding Nemo characters.

Judging by the given measurements of the sides, the annie plants are at least 1.22 km in apparent diameter, even assuming that the visible portion on the top is one full hemisphere. It seems likely that they are much larger given the angle they are shown in the first appearance, but the annie plants do seem smaller from the bottom 2004-02-24.