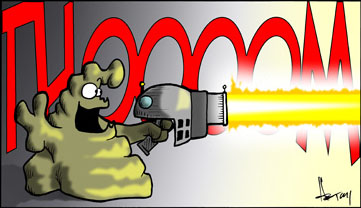 Plasguns, also known as Plasma Cannons, are a class of heavy hand weapons intended to defeat modern passive armor. These weapons function by converting local atmospheric gases into a continuous stream of hot plasma[1] and magnetically projecting it at extreme speed to vaporize and cut through materials up to and including hull metal or carbonan body armor. Thus, gravitic shields are the favored method for defeating plasma weaponry 2001-07-15. Magnetic fields could also presumably be used to deflect the plasma, though such defenses would seem a bit passé to a 31st century soldier.

The plasma stream is manipulated to create turbulence as it leaves the barrel, which decouples its thrust from the chassis and results in little to no recoil 2001-01-18. This decoupling function may be turned off in many models, which allows Newton's third law to take effect and converts the weapon into a small plasma rocket. This function is ostensibly used to counter the plasgun's weight and stabilize it for extended firing 2011-07-11, but (at least in the hands of Sergeant Schlock) it more frequently sees use for propulsion. The plasma stream can be manipulated in other ways, as well; in most cases, the focusing aperture can be varied from a pencil-thin cutting beam to a wide, short-range spray akin to a flamethrower.

This technology can scale up indefinitely. An orbital plasma lance is essentially the same weapon, albeit with a far more complicated self-perpetuating beam containment system and a warship-class power source.

Old-style plasguns such as the BH-209 run on a microfusion plant, which must "warm up" before firing by converting stored gases into plasma in a magnetic bottle. This process generates a unique acoustic effect described as an "ominous hum", which has been reported by law-enforcement agents as a powerful deterrent. The "ammunition" gases are replenished whenever the weapon has access to a sufficiently dense atmosphere. Microfusion-powered plasguns suffer a number of drawbacks. The magnetic bottle is bulky, and any damage to it renders the weapon useless 2002-02-21. Furthermore, the "ominous hum" of the magnetic bottle being filled makes it difficult to use stealthily. Newer plasguns use annie plants for power, providing the same firepower in a much smaller package. The denser power source allows them to generate plasma on demand, so these plasguns require no warm-up time before firing and do not produce an ominous hum.

Schlock's preferred weapon. The BH-209 is an older microfusion-type plasgun famous for its intimidating appearance and sound. The "m" variant is cheaper, but its firing mechanism has a peculiar (and violent) vulnerability to ethyl alcohol which makes it an inadvisable drinking buddy 2000-08-30. The more expensive "i" variant is sealed against this particular malfunction.

A "stretch" version of the BH-209, the BH-250 can generate a higher-volume plasma stream than its smaller cousin 2001-07-15. However, it is even bulkier than the 209; so much so that the designers included a forearm brace for comfortable carrying.

A typical annie-powered plasgun. The AP-130 runs on a 25mm annie plant and provides firepower comparable to a BH-209. It may not have the same range of beam adjustments and "rocket mode", however. Mini-Schlock briefly used a pair of these which he found aboard the Integrity 2005-05-29. 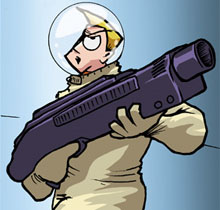 This heavy rifle-style assault weapon, nicknamed the Nutcracker, was first seen in the Toughs' rescue mission on the asteroid base 3317 Paris. While its full capabilities are not demonstrated, it possesses at least as much firepower as Schlock's plasgun in addition to a mini-missile launcher. Ebby used it to crack the annie plant powering Paris' TAD 2010-11-04.

The BH-209 is implied to store gases in the footnote on 2000-08-29, and indeed has been seen to fire in vacuum (2001-05-31) when there are no local gases available for plasmarization. The AP-130 does not appear to have anywhere to store extra gas, so it may be unable to fire in vacuum -- a significant concern for a spaceborne mercenary.

Given its size and the fact that the pirates on 3317 Paris had similar rifle-style plasma weapons, the Assault Plasgun probably represents the standard squad-level battlefield weapon for a 31st century soldier -- along the lines of a modern M249 SAW.