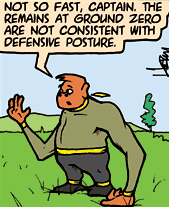 [Insert a brief description of the character here.]

Lieutenant Pongoryobi was sent out into the Outjack to investigate the loss of a couple of Captain Kerchak's scouts 2003-10-16. He found that the scouts had launched a flash-bang grenade about two hundred meters from "ground zero",2003-10-21 and that the grass around and under the "bodies" was undisturbed. Captain Kerchak commented that Pongoryobi can eat lasagna while watching the Autopsy Channel 2003-10-22. He was seriously wounded after Lieutenant Der Trihs caused the Pa'anuri to destroy his tank while Pongoryobi was standing near it 2003-10-27. All that was salvaged of him was his head and right arm 2003-12-21.

Pongoryobi first appeared as a silhouette code-named Fishbait Two on 2003-10-16.