Multicannons are the final evolution of the ballistic projectile rifle. Though outclassed in almost every way by plasma or gravitic weaponry, multicannons excel in delivering specialized warheads to the target rather than trying to overwhelm it force-on-force.

The general concept of the multicannon hasn't changed much since the mid-20th century. It fires solid payloads at supersonic speed at a high automatic rate of fire using an explosive propellant. The 31st century version of the weapon includes some form of auto-aiming technology, however, and includes "aperture controls" and plasma feeds of unknown purpose leading to the muzzle. 2002-09-05

A multicannon can mount a drum magazine to extend its ammunition capacity. 2002-09-05 UNS Marines armed with a multicannon typically carry it on a shoulder harness, loaded with anti-tank breacher rounds. The rig includes a monacle attached to the gun by a wire, presumably related to the auto-aiming function.

[Insert a brief list of the technologies necessary for this weapon. These should all have the "technology" tag.] 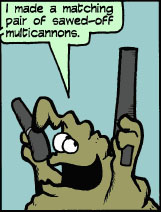 Schlock's dual sawed-off multicannons are his secondary weapons of choice. 2002-09-07 The "modifications" he made removed their auto-aiming capability, but made them easier to maneuver in close quarters.

Some battle tanks use a scaled-up multicannon for their primary armament, usually firing variable-yield anti-tank shells. 2008-12-23

Schlock found his multicannons, formerly carried by UNS Marines 2002-07-07, after having his BH-250 Plasgun destroyed on the Target Echo module of the destroyed F'sherl-Ganni Buuthandi. 2002-08-07

The multicannon delivers active payloads, so it presumably avoids gauss technology for the same reason the G/G pistol does. Gunfoam is the most likely propellant.