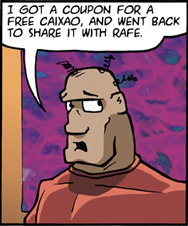 Tino is one of Shep's friends on Haven Hive, and joins Doctor Bunningus' command to help with the rescue operation after Shep is captured by unknown forces.

Tino first appeared as a street tough working for Sampaio in a failed attempt to ambush Doctor Bunningus and her companions. 2011-01-24.

Tino reappears, much to the consternation of Lieutenant Ventura 2011-04-10