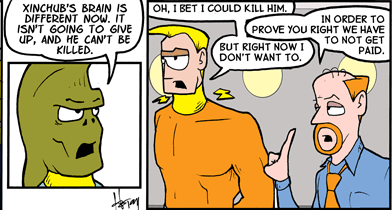 Project Laz'r'us is a human immortality project 26 years in the making 2007-11-30. The aim of it was to give humans and other terran races a leg up in reaching the kind of perspective that much longer-lived races like the F'Sherl-Ganni have 2008-02-06. The project was a success, resulting in a nanite treatment that succeeds in even more than just immortality:

When administered, the nannies purge competing nannies out of the subject's system, repopulate themselves, and do a full read of the subject's mind within a few days 2008-02-14. Once that is complete, the nannies move memories and other data stored in the brain to distributed locations throughout the body 2007-11-18. After this point, it is practically impossible for a would-be-killer to be certain that they have destroyed the subject's "brain", allowing the subject to be regrown from any available tissue, making them functionally immortal 2007-11-22. This process incidentally makes the subject almost immune to mindrip (memory and cognitive function are no longer held in the brain where the mindripper would expect, but in the nannies) 2004-03-01, 2007-11-18.

The nannies also have the ability to create an induced interactive psychotropic metaphor state, allowing them to communicate with the subject 2007-08-17, and to activate "runt super-soldier mode," an armored state which allows the subject to effectively and easily take on armored soldiers and heavy cavalry in hand-to-hand combat with a punching strength capable of tearing through hullmetal 2007-11-212008-02-15.

The project began 26 years before the 2007-11-30 strip, spearheaded by General Levaughn Matsui Xinchub. Doctor Todd Lazkowicz, creator of the magic cryokit, seems also to have been involved 2003-02-09. He hid the data inside that very cryokit 2003-02-10.

Petey later acquired Doctor Lazkowicz's magic cryokit with its Project Laz'r'us nannies 2007-05-16. He outfitted Kevyn Andreyasn with them without his knowledge, which allowed Kevyn to return from the dead 2006-10-31 and activate the "runt super-soldier mode" 2007-04-27.

The military version capable of complete personality takeover was known as RedHack. An earlier version was found on Haven Hive labeled as Retroexocephaloderm.

The demilitarized version of the Laz'R'us nanites was rolled out to the general public after the failed attempt to start a civil war in Dom Atlantis. 2015-05-15 This version is known as RED-REO, and simply backs up the user's memories into their skin and bones 2015-04-26.

[Insert uncertain and speculative facts about the technology. Include links to Schlock in the Real World where appropriate.]